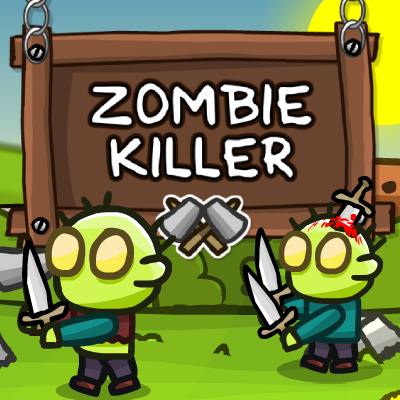 Zombie Killer promises you an exciting experience, full of fun and joy, that tests your skills and abilities. Visit Stickgames.com whenever you want to enjoy unique games, full of surprises, that you won't soon forget. Select one from our shooting category and find out what's in store for you next!

Become a fearless soldier when you play Zombie Killer on Stickgames.com and defend your base against the onslaught of vicious zombies. In Zombie Killer zombies will attack from different lanes, and in order to put up a successful defense you have to know when is the right time to move between the lanes, so that you don't get overwhelmed. When your opponents have no brains and have an insatiable appetite for brains, you know there is no other solution to survive but to totally annihilate the threat that is looming.

The more you manage to survive, the more opportunities you get to improve your defenses, either by enhancing your rate of fire, your damage, or other different attributes, which make you a deadlier soldier, and more of a threat to the zombie invasion. And when things seem to be truly hopeless, you have the option to call for reinforcements, in the form of a devastating helicopter attack. But you have to carefully assess when is the best time to send for help, because you can use this helicopter strike only after a certain delay, if you have previously used it. After all, helicopters need some time to reload, especially when they carry so many destructive weapons. Like you would expect, the more you advance in Zombie Killer, more enemies will come to attack. And not only that, but they become deadlier. It's like they hear the sounds of devastation and are attracted by it. But by using your skills, choosing the right improvements, and with a little bit of luck, you are sure to survive another wave of attacks.

Repel the zombie invasion and see how many points you can score when you play Zombie Killer!

If you liked Zombie Killer make sure to check a similar game from the ones below:

And take a look at other free games from our shooting category and find another game that brings a smile on your face!

Thank you for your feedback and for helping us improve Stickgames.com!